Accountability in the New Seafood Movement

A recent Associated Press (AP) report accused national distributor Sea to Table of seafood fraud, causing many of us in the values-based seafood community to ask deep questions. On the heels of the report's release, four ex-employees came forward revealing how they raised internal concerns to Sea to Table's leadership that were then either silenced or swept under the rug.

Sea to Table CEO, Sean Dimin, responded that the AP got it wrong, the ex-employees statements were false, and said, "the bottom line here is we may have been misled by one of our trusted suppliers."

For us at NAMA, in order to better understand this situation and its implications to our movement, we set out to talk to as many parties involved as possible. From those conversations, we learned that the bottom line is that Sea to Table demonstrated a significant lack of judgment in who they trusted and they dismissed early warning signs that should have triggered course correction. As a business committed to positive change in the seafood industry, they should have done better.

To the four ex-employees, thank you for speaking up. We know how much courage it takes to speak out as we've worked directly with many fishermen over the years who blew the whistle on those with power. In many instances the truths these fishermen brought forth were dismissed. In addition, they have been ridiculed, silenced at public meetings, bullied on the ocean, or threatened at their doorstep. We take your input very seriously and will continue our due diligence to understand what happened.

On a personal level, I know Sea to Table. They have bought fish that was caught by my family. For years I lived down the block from their original headquarters in Brooklyn and have known the co-founder, Michael Dimin, since Sea to Table began. Sean Dimin and I have spoken at events together and Sea to Table is connected through many of our networks, aligning themselves around a shared vision toward good, clean, and fair seafood.


Sea to Table misplaced their trust. 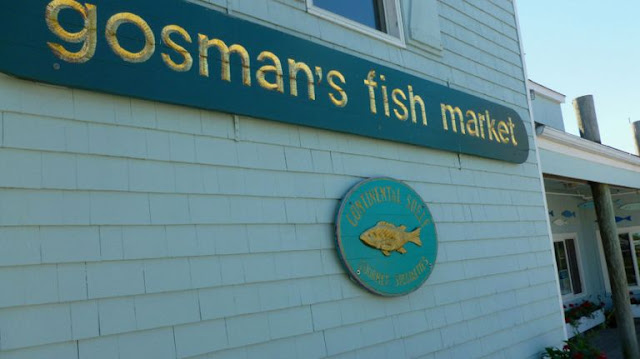 Sea to Table trusted their New York-based seafood supplier Gosman's Fish Market. We know Gosman's too. Local fishermen have walked us through Gosman's retail seafood display and pointed out mislabeled fish that couldn't possibly be 'local' but rather came from the world's second largest seafood wholesaler, Fulton Street Fish Market.

Read about Fulton Fish Market co-opting the term Community Supported Fisheries and a sign-on letter from 76 businesses across the country.

So it was no surprise when the AP revealed how Gosman's delivered 'Montauk' fish to Sea to Table that wasn't seasonal to Montauk and caught by a fisherman who wasn't bringing fish to Montauk docks.

We believe the Dimin family created Sea to Table with the best of intentions. However, they have minimal boots-on-deck experience and a short history for knowing how working waterfronts operate. Sea to Table asks the public to "know your fisherman" yet they don't really know their fishermen.

What concerns us is that if Sea to Table trusted the wrong supplier who operates in their own backyard, how can the public trust Sea to Table's judgment with any of their other suppliers?

Trust is extremely fragile in the seafood industry and yet of utmost importance. Lucid trust, not blind trust. Conservation-minded family fishermen, who have been publicly and often wrongly demonized for years, have had to work hard to regain public trust. Sea to Table had the responsibility to ensure their supply chain aligned with their values and should have worked harder at building their chain of trust. Now they will have to work even harder to regain the public's trust.

For most seafood dealers this is par for the course. But businesses like Sea to Table, who have a supply-based business model, depend on seafood sales being driven by local fishermen's catch, the story of the fishermen, and the seasonality of what is abundant in nearby waters.

As Sea to Table increased sales and expanded geographical reach the warning signs should have caused a moment of reflection. As one ex-employee put it, "The reality is that you cannot create this supply-based model on a national scale unless you are trying to change the buying habits of your customers. And Sea to Table wasn't willing to do that."

Sean Dimin told the AP, "It's a very unfortunate case of killing the good because everything is not yet perfect." But dismissing feedback from employees and fishermen is not good. Nor is putting trust in a seafood supplier whose practices were being called into question by many within Sea to Table's own community.


Around the country, increased seafood fraud is giving rise to alternative solutions. Over a decade ago one those solutions emerged from the Port Clyde fishing community, which together with NAMA piloted the first ever "Community Supported Fishery", taking its cue from the land-based "Community Supported Agriculture" (CSA) model.

Since then hundreds of other Community Supported Fisheries and values-based seafood businesses have popped up around the country and around the globe. We've been honored to work with several of those communities to create these new models and the many machinations that have emerged since. That's why we take this case very seriously and any others that compromise the intent and values that birthed the first CSF and the new seafood movement. Much like those whistleblowers, we consider it our obligation to speak up.

Since those early days, LocalCatch.org has emerged to provide a platform for this growing seafood community and is now the go-to hub for connecting and aligning seafood businesses, organizations, researchers and eaters around shared values, and re-imagining what the seafood supply chain could look like.

All this momentum and more helped pave the way for values-driven seafood businesses to thrive, including Sea to Table.

To start taking leadership for the collective movement, the LocalCatch.org network created a baseline set of values in 2016 to guide the seafood revolution (or, 'revolocean' as coined by fisherman Aaron Longton) that we would embody to help transform the seafood industry.

Our seafood community has a responsibility to protect these values and provide support to businesses seeking to align around our shared vision. Some of these core values include fair price, transparency, and eating in line with the ecosystem's rhythms. Embedded in these values is the concept that the public demand for seafood shouldn't dictate the supply chain. Rather, our eating patterns should align with the bounty of the ocean, community-based fishing, and much more.

But too commonly, we see seafood suppliers striving to fill orders that are misaligned with what local fishermen are catching. Rather than say "no, our fishermen are not catching this right now", they attempt to fill the order gap through the global commodities market that is fraught with mislabeling and labor exploitation. Our values along with those of the founding CSA and CSF models, however, compel us to educate eaters to 'eat with the ecosystem' and also share the risks with the fishermen. One way of sharing those risks is through eating outside of our comfort zone and embracing what is abundant in our nearby waters.

Ultimately, as we've learned from other movements, we know that many of the systems we put in place will be manipulated by others for their own gain. This means we must work even harder to protect the values we stand for and create a diligent network whose members will be accountable to themselves and each other.

As part of the LocalCatch.org network, we've begun to operationalize the Core Values. The LocalCatch.org website now prominently features seafood companies and the values on which their practices are based so the public can make smarter choices in their seafood sourcing.

In addition, LocalCatch.org and leaders within sister networks such as Slow Fish are beginning to consider 'community accountability' models that would continue to enhance trust and transparency in seafood. In many ways, the fishermen and ex-employees who raised concerns to Sea to Table demonstrated what this looks like. However, rather than dismiss them, we seek to elevate these voices, engage in challenging and honest dialogue, and ultimately help each other make course corrections when growing pains present a challenge. 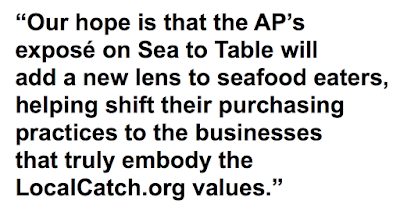 Sea to Table can take a step in the right direction by at least acknowledging the legitimate warning signs that were brought forth by fishermen and ex-employees and in addition, establish internal policies so that any future concerns are properly considered and addressed.

In the meantime, Massachusetts Senator Markey is calling for an investigation on Sea to Table. This type of action is one of many that are needed to bring forth solutions that will improve our seafood system. If the Senator is serious about his intent to find answers and justice, there is more than can be done.

For starters, he (and others) should address the main reasons for seafood fraud which includes the current corporate consolidation of fishing rights and concentration of power along the entire seafood supply chain. These solutions can be implemented in the reauthorization of the Fish Bill (Magnuson-Stevens Act) by including limits on fisheries consolidation, incentives for improving supply chains, and more.

Our hope is that the AP's expose on Sea to Table will add a new lens to seafood eaters, helping the public shift their purchasing practices to the businesses that truly embody the LocalCatch.org values. As for NAMA and our network, we will continue our role in moving toward good, clean, and fair seafood.


Posted by Northwest Atlantic Marine Alliance at 9:40 AM 8 comments: