Who Funds Us Matters


Posted by Northwest Atlantic Marine Alliance at 6:43 PM No comments:

In early May we kicked off this year’s Seafood Throwdown season in Providence, Rhode Island with our partners, Farm Fresh Rhode Island and the African Alliance of Rhode Island. The Throwdown was at Farm Fresh RI’s annual seasonal kickoff event for their Farmers Markets, where for the first time they were selling fresh local seafood from a local fisherman!

As the months came upon us we found ourselves in multiple communities in Maine, Massachusetts and Vermont! What a road trip! The van was packed to the point where we couldn’t see out the back window and there was barely room for our personal stuff while we took in breathtaking sights as the roads led us to our host destinations. What great days these road trips are!

My job on that day is to watch over the logistics pieces making sure everything is falling into place or close to it, all the while being outside in a Farmers Market or Festival atmosphere. How cool is that?! I’m in the midst of people who are happy just to be outdoors supporting their community, surrounded by their neighbors.

As they come to watch the Seafood Throwdown, they’re in for a treat of being tantalized by their five senses; seeing this unusual species with an eye popping gotta get closer; hearing all about what the Mystery Fish is, where it came from and what’s this all about; then there might be some touching, yes, there are a few brave souls that want to feel it, for they never have been around this species before; once the competition starts smelling the aroma draws them closer; then the final sense utilized is tasting the chefs’ creation using all things local, a perfect ending to an all inclusive (using your 5 senses in one place) experience!
I’m inviting you to stay tuned for our 2016 Seafood Throwdown season. We are hoping to reach many more communities this next year!
See you next year,
Cynthia BushFinance Coordinator and Program Associate

Making a difference, One Seafood Throwdown at a time! 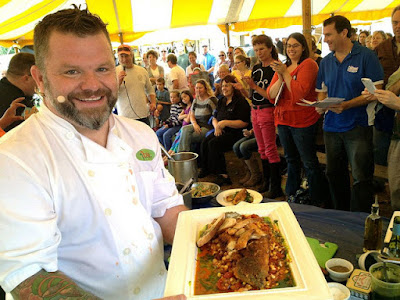 Posted by Northwest Atlantic Marine Alliance at 3:51 PM No comments:

This post comes to us from NAMA Community Organizer Shira Tiffany.
Choosing the ten most powerful moments from my first year at NAMA was a challenge. There have been so many moments when I felt the power of people coming together, connecting our stories and values, and acting for change. Here are some that stand out from my first 14 months with NAMA.

Fishermen bravely testified before the New England Fisheries Management Council on the Fleet Diversity Amendment and led students, seafood consumers and distributors, and other allies in walking out of the meeting. After years of working with the Council, fishermen and allies walked away from the broken “democratic” process and to show the Council’s failure to limit fleet consolidation under Catch Shares. Watch testimonies by fishermen Jason Jarvis, Shannon Eldredge, Stephen Welch, and more. 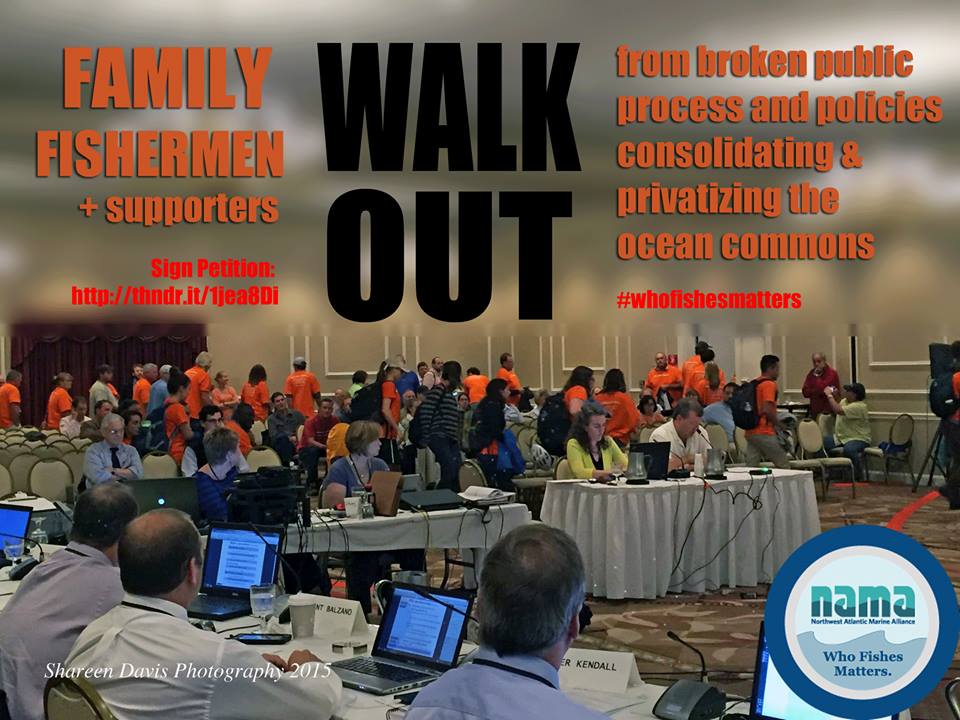 One year ago today workers at seafood processing plant NORPEL presented a letter to management listing eight demands, among them a $15 minimum wage. Workers and allies held a vigil in front of the plant. It was colder this time last year!

#3: Hauling in the Catch Aboard the F/V Holly & AbbyOut of Hyannis, Cape Cod, MA4 am, July 28th, 2015
I ventured out on my first commercial fishing trip with Captain Stephen Welch. I learned A LOT. What I took away is how comfortable Stephen is behind the wheel and how much fishing means to him. It’s not just how he’s supported himself and his family, it’s how he’s mentored young people, and found meaning and purpose. He’s been fishing in the Gulf of Maine and Nantucket Sound for longer than I’ve been alive and has an incredibly vast wealth of knowledge. As long as he's been hauling in nets, my highlight from that day is still true for him too. When you haul in your nets, what you find is always a surprise.


#6:  Swarm TrainingCambridge Co-Housing, Cambridge, MANovember 6th to 8th, 2015
Sarah Schumann, President of Eating With The Ecosystem, and I learned best practices of decentralized organizations among leaders working on issues from immigrant rights to climate justice to prison abolition. Hours of conversation with Sarah and others during our weekend-long immersion into working ON our organizations instead of IN them was a great kickstarter for this important and easily overlooked work.

The first ever Food Chain Worker Delegation to the New England Food Summit brought 11 incredible food chain worker-organizers from across the food chain to share their courage and tenacity in the fight for worker justice. 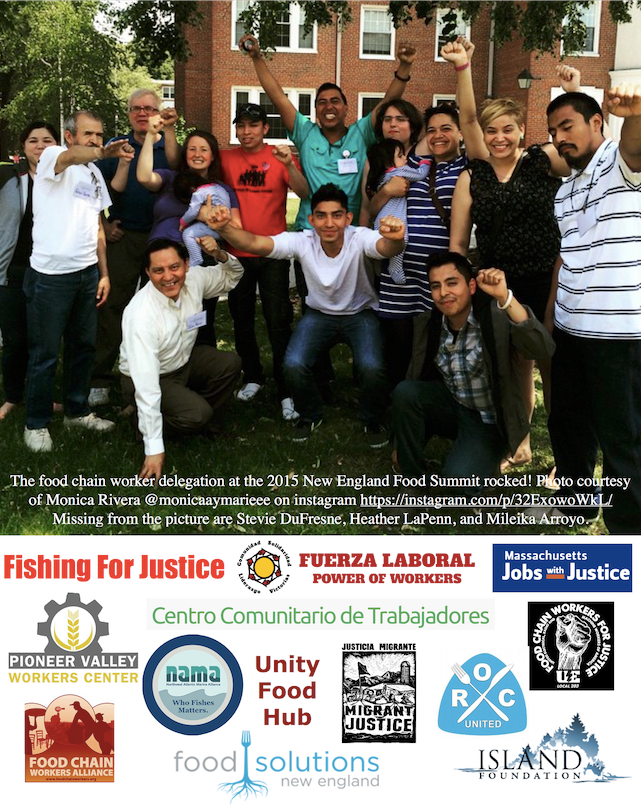 Organizations working for food sovereignty around the world gathered to be in solidarity and learn about agro-ecology. It was inspiring to share stories, songs, poems, meals, cooking, seeds, and take action with folks working for food sovereignty around the world. I listened to Wisconsin family dairy farmer Joel Greeno and Iowa family farmer Brad Wilson stories of resistance to corporate agribusiness. Miriam Miranda, Coordinator of the Black Fraternal Organization of Honduras (OFRANEH), shared about the movement of indigenous Garifuna fishermen and farmers defending and strengthening their land security and their sustainable, small-scale farming and fishing.

Emerging Leaders in the Food Solutions New England Network made space together to dig into how racism plays out on various levels of the food system - internalized, interpersonal, institutional, and systemic - and how to work to dismantle racism. Incredibly important work and there’s so much more to do.


We hosted a sunshine and fun-filled Seafood Throwdown with our partners Beth Israel Deaconess Medical Center, host Roxbury YMCA, and Boston Collaborative for Food and Fitness, at the kick-off event for Roxbury Rising Against Diabetes. Boston City Councilor Tito Jackson was the MC!

...and the Wobble
Posted by Northwest Atlantic Marine Alliance at 2:40 PM No comments: