It’s time to hit the Revol-Oceanary Road again, this time with my dog Hailey. It turns out that I’ve been on a work-related summer road trip for over 20 years. It all began in 1991 when I headed to Chester, WV. That trip lasted two years as I ended up staying there to work with the community to fight WTI, the world’s largest toxic waste incinerator. In the years that followed, my summer pilgrimages timed with the Indigenous Environmental Network’s annual Protecting Mother Earth Gatherings. Those Gatherings haven’t happened in some years, but there hasn’t been a shortage of destinations to serve as my own personal vision quest, allowing me to really think about why I do what I do, and the people and ecosystems that are in the middle of it all.

Unlike last year’s cross-country train trip, this year’s trip will be regional and it will start at the first ever Vermont JerkFest in Killington. That’s right… a Jamaican style festival right in the middle of Vermont! And if that isn’t revol-oceanary enough for you, we’ll celebrate food from the ocean with a Seafood Throwdown. But just as importantly, we get to feeling irie with the reggae ambassadors, Third World! 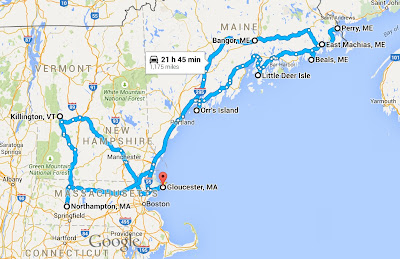 From the JerkFest, I’ll be heading to Northampton, Massachusetts where I’ve been invited to speak at the Center for Popular Economics' annual summer institute focused on “Confronting Capitalism and Climate Crisis.” How’s that for a revol-oceanary event!

The rest of the trip will take Hailey and me to Maine where lots of revol-oceanary work around fisheries and marine conservation has been going on for decades. And it continues today.

Over the past few years as the glass eel fishery has become valuable to non- tribal people, the tribe has seen major encroachment onto its fishing grounds. As the tribe stepped up its protection of the glass eels, Maine’s Governor LePage has retaliated heavily, including rescinding a 4-year-old executive order that said the tribes would be consulted on state decisions that affect native people and suspending truth and reconciliation commission aimed at uncovering and acknowledging the truth about what happened to Wabanaki children and families involved with the Maine child welfare system, heal and learn from the truth, and work for the best welfare system for the children.

LePage has also ordered fishing gear to be confiscated, and has made decisions that seem to be specifically targeting the Passamaquoddy fishers. Vera’s fishing gear has been confiscated as she’s been fighting for sustenance level fishing for glass eels.
This spring, the Passamaquoddy took a revol-oceanary step to protect their sovereignty when they withdrew from the Maine State Legislature along with the Penobscot and Micmac. This is a brave step, and one I hope we are brave enough to take when those in power abuse their authority for the benefit of a few.

It’s worth noting that when I started working on fisheries issues in 1994, Maine became an important training ground for me. People like Robin Alden, Ted Hoskins, Jen and Rick Bubar, Will Hopkins, Brent Oliver, Ted Ames, Paul Molyneaux, the late Bill Crowe, the late Pat Percy, and of course NAMA’s first director Craig Pendleton and so many others were there early on as really important teachers.

I’m certain this trip will deliver when it comes to lessons and inspirations. Stay tuned for stories of inspiration from along the Revol-Oceanary Road 2015.
Posted by Northwest Atlantic Marine Alliance at 4:14 PM No comments: