Mayday Mayday: Democratic Control Over Our Fish is Going Down 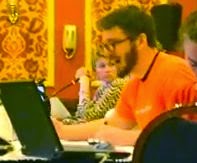 This post comes to us from Brett Tolley, NAMA Community Organizer


As the son of a commercial fisherman I feel a deep connection to those who risk their lives at sea and so I take very seriously the mayday distress call. That said, if there was ever a moment that warranted distress over the state of our ocean commons and fishing livelihoods, that moment became crystal clear for me following last week’s events at the New England Fishery Management Council meeting.

Fishermen and the public came to the Council meeting to provide input on the fleet diversity amendment to the New England groundfish Catch Share policy only to be shut down by the Chair of the Council. From the moment they walked in the room it was clear they weren’t welcome.

When I asked the Council Chairman Terry Stockwell if he could allow time for the group of fishermen, students, and hospital representatives to testify he said "no". Stockwell claimed that there was too much on the agenda to make room for that kind of input. Not only did he insist “no” in response to my plea that he consider how far folks had traveled – in some cases 4 to 5 hours – instead of listening and being a public servant, he called me an “asshole” publicly.

This was not an isolated incident and truth be told, Mr. Stockwell is mainly guilty for saying out loud what other Council members who want to maintain status quo have been saying under their breath. For years, those speaking up about the failure of the Council have been characterized as people who just don’t get it, aren’t smart enough to understand the system, or fishermen who are upset just because they didn’t get enough quota.

Certainly Mr. Stockwell failed to act professionally and failed to act as a public servant, but his behavior shines a light on two much larger failures of the Council system.

The Council failed to deliver on its promise that Catch Share policy would save the fish and improve fishermen’s livelihoods. Proponents of Catch Shares claim that ownership over the rights to fish is the only way to achieve stewardship. This is not true. Following Catch Share policy implementation in New England we witnessed an increased fishing pressure on discrete fish populations that left inshore-dependent fishermen without fish to catch. This adds insult to injury for the fishermen who worked for 15 years to rebuild those inshore stocks and warned the Council since the start that the Catch Share policy without safeguards would jeopardize rebuilding.

Not only did the lack of safeguards fail the fish, but also the fishermen. Fisheries access is further consolidating into the hands of a few, and according to the National Marine Fisheries Service report, last year one entity earned 25% of the total fishery’s revenue.

The Amendment 18 Fleet Diversity policy held the promise of fixing these problems but the Council has completely ignored fishermen and public input and demonstrated clearly they are too entrenched in the status quo and unable to fix these problems.

The second failure has been the Council’s supression over the public process. In my relatively short time coming to the Council (5 years) I’ve personally been shut off at the mic on three separate occasions, harassed by a Council member in the parking lot outside of a Council meeting, and witnessed countless fishermen be ignored and dismissed while testifying.

I’ve watched on multiple occasions as fishermen who have driven 5 hours or more, missing work, sat all day waiting for their moment to testify to then have the agenda item bumped at the last minute, with no recourse.

The public process is being hijacked by a small but powerful few, which has allowed for these policy decisions to take place behind closed doors and out of the purview of the public eye. It’s often clear that decisions are made elsewhere and the Council meeting process is nothing more than a show.


It’s worth noting that this is not the first time the Council has failed despite attempts at public input. For years, NAMA and our allies have warned that Catch Share policies will privatize fisheries and prevent public input over our ocean commons.
Stacia Clinton from Health Care Without Harm testifies
at April's Council meeting, speaking about why
fisheries policy, consolidation, and issues
of access matter to regional hospitals

We have come to the Council before to offer alternatives only to be shut out. Before Catch Share policy was adopted, thoughtful proposals were submitted only to be ignored. Reports are rampant of public opinion being dismissed. NAMA’s Coordinating Director has numerous stories starting from 1994 when she first started working on fisheries issues.

That's why in 2010 it was no surprise that instead of responding to public input the Council literally rushed through the adoption of the Catch Share policy and promised to fix any problems they didn’t foresee. Although we suspected that promise was disingenuous from the start, we wanted to keep an open mind and be proven wrong. Unfortunately we were right.

Part of this failure falls directly on the New England Fisheries Management Council. However, their actions are rationalized because the law that governs US fisheries - the Magnuson-Stevens Fishery Conservation and Management Act (or what we are calling the Fish Bill) - lacks any sincere measures for ensuring public input, and demanding transparency and accountability from the Council. That’s why we must work nationally to change the law for the better while working regionally to fix its symptoms. We submitted our recommendations for changes to the Fish Bill to members of Congress last fall.

After Chairman Stockwell called me an "asshole" he apologized and we negotiated that he would allow testimony from three students, one health care representative from Health Care Without Harm, a couple fishermen, and myself.

Estephanie Naraez, Regional Coordinator for the Real
Food Challenge, testifies to the Council why policy,
fisheries privatization, and consolidation matters to
students and Universities.

The shared message brought by the fishermen, students, fisheries advocates, and health care representatives let the Council know that they have failed and are incapable of solving the social, economic and environmental problems related to fleet consolidation.

Mr. Stockwell's apology to me after calling me an asshole was a good start, but it was not enough. Mr. Stockwell and the Council leadership should apologize to the public and to the fishermen they are failing for blocking the public process and handing over a public resource to a select-few at the expense of the health of the marine ecosystem and future generations of this fishery.
Posted by Northwest Atlantic Marine Alliance at 8:46 AM No comments: