What happens when food is valued as a commodity first, a source of nutrition last?

This past month I was fortunate to spend time with friends at the National Family Farm Coalition. For three days we discussed the messages consumers need to hear to support programs that create a better food system.

Current strategies to educate consumers via Fair Food, Buy Local, and branding campaigns have taken good steps to highlight inequity, but haven't yet effectively put a face on the problem. We still don't know what percentage of a dollar goes to our food producers, nor do we know the percentage that goes to those who sell it.

Fact: The current price paid for production cannot support a farming or fishing family.Neither can it support those who work for farmers or fishermen. Current food prices cannot provide a living wage to a farm worker or a crewman, either. We need to ask what percentage of the price we pay is returned to the farmer/fisherman who cares for the resource that gives us our food.

Fact: A farmer or a fisherman forced to produce more food for less return manifests itself in our communities as poverty, pollution and environmental degradation. And whether it's land grabs or quota consolidation, for food producers, the cost of doing business keeps climbing.

Fact: Our political climate abets this process when SNAP benefits and conservation measures are the first things eliminated in the current iteration of the Farm Bill. These social protection programs are being sacrificed to secure greater profit for the commodity buyers of our milk, meat and vegetables. These commodity buyers/sellers compete in global markets that sell “cheap food” at a loss to the farmer and the fisherman.

Fact: Under the current system, food is exploited as a commodity. Attempts to address the nutritional needs of our communities have been halted by powerful interests that exert influence on our legislators. Food is  valued as an item of trade first, and a source of nutrition last. The true value of our food is primarily aimed at the expense of the people who produce it.

We need to provide a fair price for our farmers and our fishermen that promises them a livelihood, and restore access to good food in our rural communities and inner cities. We need to create a community of broad support that includes citizens-consumers to create a culture of change – as I heard it at the conference.

Citizens need to resist these trends! More people need to advocate for legislation that measures food in the community values of health and environment . We need to change the current food system into one that serves the basic needs of all working people. Food is not a commodity. It is a basic human right.

-Meri Ratzel is a Cape Cod-based food and fisheries activist with a biology background. She started the Cape's first Community Supported Fishery program and is currently working on projects to improve local food systems and fisheries research.

It's August, and go time for local food. The farmers markets and CSA boxes are full to bursting with ripe, seasonal produce - tomatoes of all colors and shapes, zucchini, corn, fragrant basil. And don't forget striped bass, bluefish, scallops, cod - the list goes on.

In 2011, U.S. commercial fishermen caught 7.9 billion pounds of edible seafood.  But people in the U.S. consumed 4.7 billion pounds of seafood and 91% of that was imported.  I have to ask myself: is this sustainable?

We certainly catch enough fish here in the U.S., why do we need to import fish? Why do we need to eat fish that has traveled thousands of miles to get to us?  I know most people don’t think about the increase carbon footprint that imported fish is creating.  Often we don’t think about how about how long the fish has been out of the water from the time it was caught. The local food movement is growing and I think fish needs to be part of that movement. 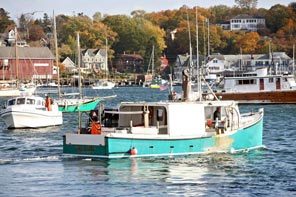 According to Matt Tinning, Executive Director of the Marine Fish Conservation Network, Americans are unknowingly creating demand for imported and unsustainable fish.

Many of us rely on places like the Monterey Bay Aquarium’s lists and the Marine Stewardship Council’s (MSC) eco-label to determine what fish is sustainable. When I read MSC director Kerry Coughlin’s article for Huffington Post Green, Seafood Sustainability Requires a Global Approach, I realized that the MSC has made headway on addressing the need for a global approach for sustainable fish.

But it’s expensive to be on the MSC’s list and get their certification. Many small-scale fishing operations cannot afford to get the certification, just as many farmers cannot afford to pay for organic certification.  The science used by MSC to measure fish populations is one piece of the story – but there are many factors that come into play when you’re talking about sustainable seafood, like imported fish’s impact on our costal communities.

U.S. fishermen are forced to fish at higher volumes and sell at lower prices in order to compete with imported fish.  The idea of who can fish, where they can fish and what can be fished is a global issue, with a lot of regulations controlling the ocean.

Most likely U.S. fishermen live in a fishing community and were taught by that community about what is okay to fish based on seasonality.  It is essential for them to assess current fish populations and not overfish.

I am not sure that commercial conglomerates have the health of the eco-system in mind as they trawl the ocean floor for fish. As a consequence, they are discarding bycatch when fishing for their target species and killing a lot more than the fish they sell.  Doesn't make sense and doesn't seem sustainable.

I have given this a lot of thought, and personally, I cannot define imported fish as sustainable or green.  When I buy fish I try to find local fish as my first choice.  Second choice at least, is U.S.-caught to support the domestic industry.

For some people, food choices are simple. For me, they’re an opportunity to make the world a better place.  Who fishes matters!

Pamela Flash is a Long Island-based good food advocate, graduate of the Natural Gourmet Institute, and mother of two. She volunteers for NAMA as an event and social media coordinator.

Posted by Northwest Atlantic Marine Alliance at 9:51 AM No comments: