Crossing the Pond to Talk CSFs


Earlier this month I traveled to Stockholm, Sweden for the European Fisheries Areas Network* (Farnet) “Marketing the Local Catch” workshop. FARNET is supported by the European Commission's European Fisheries Fund. Representatives from Fisheries Local Action Groups (FLAGs) in 21 European countries descended upon the city to learn about how to help fishermen develop & sell their region’s locally-caught fish in alternative markets. The organizers of Farnet asked NAMA to participate in the “Short Chain Markets: Community Supported Fisheries” lab. As a guest "expert,"I spent three days helping the FLAGs build a toolbox of resources and steps to starting CSFs and fish box schemes around Europe’s coastal communities.

The concept of CSFs was fairly new to most of the FLAGs, who were visiting from Spain, France, Greece, Italy, Estonia, Cyprus, Finland, Latvia, the Netherlands, UK, and beyond. My co-expert was Jack Clarke, who recently started the first CSF in the UK called “Catchbox,” and Paul Soto of 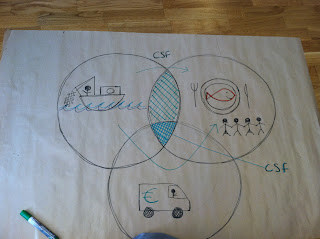 Over the three days, we discussed the basic components of a CSF—how it works, who is involved, and gave the example of various CSF initiatives in the United States, and the UK’s fish box scheme. We negotiated possible challenges such as broker/fisherman relationships and lack of a local niche market, and found solutions like incorporating intermediaries into the process and consumer education of under-appreciated species.  The FLAGs, who spend time daily with fishermen in their regions trying to discover new ways to market their catch as well as advocate for fair prices and policies, created a ‘universal’ symbol for short chain markets and laid out the bare bones steps to building a CSF.

Along some of Europe’s coasts, short chain markets and direct sales of fish have successfully existed for centuries, and the participants shared the knowledge they’ve observed and learned from local fishermen. In other places, the scale of the fishery is industrial, as is the market. Independent fishermen are trying to carve out a niche for their smaller catch because they believe short chains and direct sales will work well in their communities, and provide all with a better product.

But there are still folks who believe this process could never work because the tradition of auction-based sales for a global market, far removed from the fishermen and their communities, can never 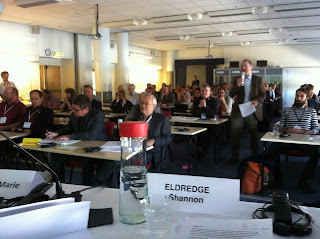 In the end, European fisheries and markets share a lot with what is happening in New England’s fishing communities, and around the United States. The question that arose time and again in Stockholm around short chain, direct sales and community-based markets was this: Can it work, and can it change the face of the industry for the better? The answer, rooted in hope was this: Yes it can. It starts with one fisherman and one consumer working together to make a difference.

Shannon Eldredge is a commercial fisherman and a shellfish harvester on Monomoy Island and a weir fisherman in Nantucket Sound where her family has been involved in environmentally sound fishing practices using weirs, the oldest most passive way of fishing, since 1953. She serves on the board of directors of the Women of Fishing Families, is the co-propriotor of the Cape Cod Community Supported Fishery (CSF) and serves as the president of NAMA's board of trustees.
Posted by Northwest Atlantic Marine Alliance at 2:47 PM 1 comment:

When fishermen, food activists, and chefs rode together on buses to Raleigh

Recently in North Carolina, a group of fishermen organized a rally to maintain their access to red drum, spotted sea trout, and estuarine striped bass.

The rally drew close to 300 protestors, and fishermen, food activists and chefs rode together on buses to Raleigh.

A recreational fishing group had proposed a bill that would designate those three varieties of fish as gamefish, thereby banning the commercial harvest.

Recreational fishermen say that the bill would be an economic boon to the state - with more anglers coming to NC to fish - and that the impact on commercial harvesters would be negligible. But a coalition of chefs, consumers, and farming advocates disagreed - and joined with the fishermen to protest the bill in person and via an online petition.

Groups like Chefs Collaborative and the Carolina FarmStewardship Association sent action alerts warning their members that the bill would take NC seafood off the dinner table.  And the North Carolina Farm Bureau Federation recognized commercial fishermen as important food producers.

The support from the local food community was all the more remarkable considering that seafood was barely on the radar screen of local food advocates during a series of statewide “farm to fork” policy discussions that took place in 2008.

A lot of work has taken place since fishermen and their friends witnessed that void.

Groups like NC Catch and its local catch affiliates are working hard to educate consumers about seafood seasonality and the economic, ecologic, and cultural benefits of buying local seafood.  “Bringing Seafood into the Local Food Movement” was the theme of their annual summit and Uli Bennewitz, a pioneer in the movement in North Carolina, was the keynote speaker.

Coastal communities are hosting more local seafood events, like the Seafood Throwdown at Day at the Docks in Hatteras in September that NAMA graciously helped stage.

Most of our seafood still heads north to out-of-state markets, but more is moving west to supply in-state demand.  Community-supported fisheries are delivering seafood to drop-off locations in places like Raleigh and Durham.  More North Carolina is available at inland farmers’ markets, and entrepreneurs are turning inland chefs onto species, like sheepshead and cobia, that are new to them.

We have been told that the gamefish bill will not be run this session, but proponents are continuing to pressure legislators to bring it to a vote this summer. In any event, it’s likely to be back for consideration next year, so fishermen aren’t resting easy.

Still, it is reassuring that North Carolina seafood is recognized as an important component in the local food economy of a state better known for its sweet potato and turkey production.

Susan West is a journalist and lives on Hatteras Island, NC with her husband Rob who is a commercial fisherman.  West serves on the board of NC Catch.

Posted by Northwest Atlantic Marine Alliance at 9:02 AM 1 comment: