The other day, a member of the New England Fisheries Management Council caught up with me in the parking lot outside a fisheries meeting. He said, “Brett. C’mon, what is all this big box bull@#$%? We don’t have any big box boats here in New England.”

I said "yes we do have big box bull@#$% happening in New England."

Too many people think when we talk about Big Box Boats we are talking just about the size of the boat. Yes, size does matter, but what we are really talking about are values. And one of those values is about matching the size of the boat - or the scale of its operation - to the scale of the marine ecosystem. That means some boats may have to fish somewhere else, but that should be driven by what the ecosystem can handle not by movement of global capital. 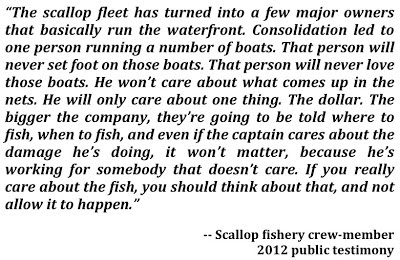 We know the terms Big Box Boats along with a fisherman-led petition we helped start called ‘Fight the Big Box Boats’, has ruffled some feathers. But we also know that it has empowered some fishermen and fishing communities. For every time this work is called bull@#$%, there are others who think it’s overdue. In fact, some fishermen have told us they are glad we are putting out phrases like Big Box Boats and Who Fishes Matters because it’s liberating them to say what they’ve been wanting to say for a long time.

Still we are pushed to define what we mean when we say Big Box Boats. Fair enough. But instead of getting caught up in a definition war with folks who want to use semantics as a stall tactic, we refer to values and definitions of Big Box vs. local operations that others have already come up with. For those, we turn to our friends at the Institute for Local Self Reliance, Business Alliance for Local Living Economies, Sustainable Business Network and others. The values they’ve begun to measure include:
In the world of fisheries, some of these values present themselves in different ways. From an environmental impact perspective, ‘Big Box Boats’ values are ones that allow fishing at a scale that the ecosystem cannot take. Recent policies that have opened up the doors for offshore boats to come inshore bringing an inappropriate scale of operations into the Gulf of Maine fishing grounds are a good example. These policies are responsible for wiping out 15 years of rebuilding efforts. So now all fishermen have to pay the price by facing severe cuts in their quotas.

When it comes to wages, benefits, employment, and social and civil well being we know the ‘Big Box Boat’ values have led to wage depressions in many fisheries, specially the surf clam industry where pay is fairly stark. In the New England groundfish fleet we know that crews are getting paid less to work harder and that leasing costs come out of crew salary. We know some boats are fishing in the red because they are not getting a fair price for their catch; the same catch that we as consumers pay big money for thinking it's all going back to the fishermen. We also know that captains are cutting costs by taking on less crew, which often means fishing alone and compromising their own safety.

Another consequence of the Big Box Boat mentality is seeing fewer and fewer actual fishermen owning boats and or permits, or even showing up to policy meetings and instead they are replaced by absentee owners, and at meetings with lawyers, prospectors, investors, NGO advocates, and industry lobbyists that don't always represent them.
I know I’m only scratching the surface here. Over the course of the next few months we’ll explore each of these values more in depth, but for now I hope we have brought a little more clarify to what we mean by Big Box Boats.

Remember: it’s about values not inches.

Posted by Northwest Atlantic Marine Alliance at 4:59 PM No comments: