Salmon in the Crosshairs

For the past five years, I have been part of a wondrous migration that takes place each summer in Bristol Bay, Alaska. It is a rush of movement that takes place by sea, by land, and by air; a mad dash triggered by a swarming of fish and followed by the predators that chase them – including the fishermen and cannery workers who make their way here from neighboring villages and around the globe to harvest, package, and ship this nourishing fish to dinner plates worldwide.

My own role in that mass migration takes me from my year-round home of Rhode Island to a salmon cannery on the edge of the Nushagak River, which drains into Bristol Bay. Once there, I am in charge of steam-cooking the sealed cans of salmon as they come off the processing line.  I am one of the tens of thousands of people dependent on the summer salmon run for my year-round economic wellbeing. It is because of my humble appreciation for that resource that sustains so many, and in solidarity with the residents and commercial fishermen of the Bristol Bay region, that I ask all members of the New England fishing community to take a stand against the proposed Pebble Mine.

Since the early 2000s, the Pebble Limited Partnership (a joint venture of Northern Dynasty Minerals and Anglo-American) has planned to construct a copper, gold, and molybdenum mine near Lake Iliamna, at the headwaters of the Nushagak and Kvichak Rivers. These waters, which flow into Bristol Bay, are prime spawning grounds for salmon, and Lake Iliamna is known as the largest incubator of salmon in the world. When the Pebble Mine is formally proposed and evaluated, it will benefit from the support of many powerful interests. This is why many Bristol Bay communities and salmon fishermen are giving their all to the struggle to defeat the mine.

The environmental risks posed by such a mine are numerous. If constructed, the mine itself would remove 87 miles of salmon streams and thousands of acres of wetlands.  In addition, mining activities would produce acidic and metals-laden waters, which would degrade water quality downstream if released into the environment. Waste rock piles and tailings dams would require management in perpetuity, long after the hundred-year lifespan of the mine, lest they leach or spill contaminated residues into the watershed.

Pebble Mine would be the largest gold mine and the fifth largest copper mine in the world. The mining companies and their allies in government see greater value in short-term profits made by extracting minerals from the ground than in the long-term value that is already being provided by one of the world’s last remaining healthy salmon-based ecosystems – an ecosystem that supports 12,000 commercial fishermen and is the lifeblood of two Native Alaskan communities -- the Yup’ik and Dena’ina, two of the last intact salmon-based cultures in the world. For the commercial and subsistence fishers of Bristol Bay, it would be unthinkable to put this miraculous and life-sustaining renewable resource at risk.

For more information or to take action online, visit the website of the Commercial Fishermen for Bristol Bay, an advocacy group founded expressly to protect fishing livelihoods from the Pebble Mine: http://fishermenforbristolbay.org. This coming Wednesday, I will be hosting a screening of the documentary Red Gold at the Hope Artiste Village (1005 Main St.) in Pawtucket, RI, at 7:30 PM. Please join me! 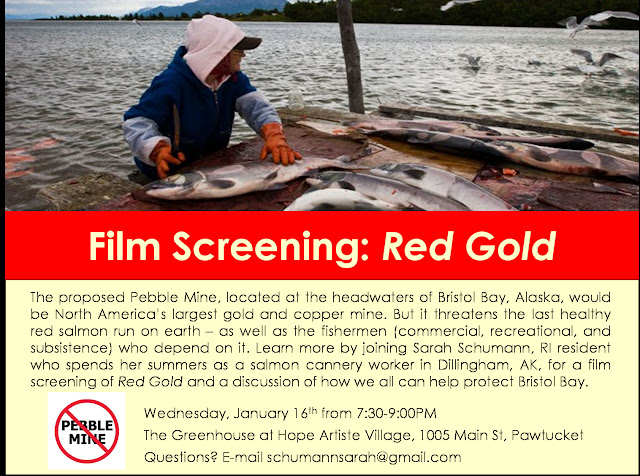 Posted by Northwest Atlantic Marine Alliance at 7:37 AM No comments: