NAMA recently submitted comments to the Joint Subcommittee on Aquaculture, an interagency committee associated with the Whitehouse Office of Science and Technology, on the Draft National Aquaculture Research and Development Strategic Plan. As I read through the proposed plan I realized how old I am - old enough to know that exciting and innovative research that could have inspired a different path for aquaculture in this country and the world has been forgotten or never seen by most, though not by me.

Some of that promising work was prevalent in the 60s and 70s, when efforts such as the New Alchemists in Falmouth, MA and the Environmental Systems Laboratory at nearby Woods Hole Oceanographic Institution led by such creative scientists as John Todd and John Ryther respectively. The influence of visionaries like Buckminster Fuller is obvious in some of the aquaculture designs that emerged during that time. I myself was involved in a bit of multi-species, land-based aquaculture research, though it was far from the forefront of all that was being explored at the time.

The US government was putting money into many of these research efforts, which included, among other innovations, the integration of fish aquaculture into farm and greenhouse operations so that wastes were recycled productively; the use of aquaculture to treat sewage wastes; experimenting with a diversity of species; and polyculture (several different species grown together or in connected sequential cultures) to clean water and/or grow marketable products -- all these in systems that created no net waste and used no valuable wild feed resources. They were enhancements to the environment while providing functioning living systems and useful products, including food, seaweed extracts,  attractive functioning wetlands, etc. Both fresh water and marine aquaculture systems were designed. The federal government while, investing in research that produced innovation and potential for the future, ended its investment there and did not support the development of these designs into commercial-scale systems. Some researchers and visionaries like John Todd went on to use private funding and community investment to install living systems that improve environmental quality for municipalities, resorts, and private business.

The graphic below, from Dr. John Todd, illustrates how ecological aquaculture can be an integral part of a whole earth system.  You can view and learn more about this image and explore innovative systems, like the Four Seasons' fish pond in Hawaii, at the Ocean Arks International website. 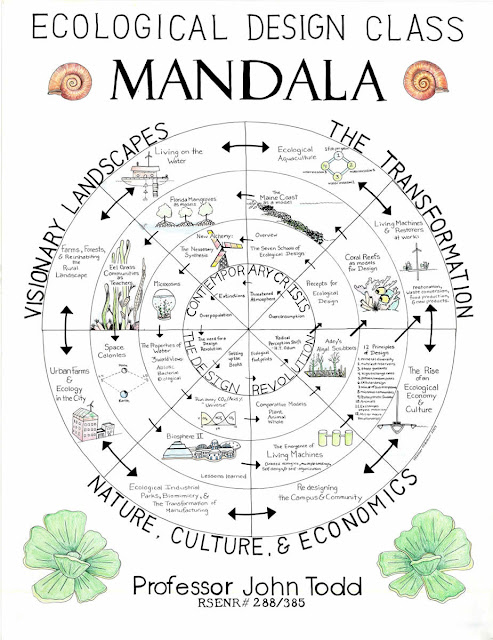 Researchers who remained in academia and reliant upon federal funding had to abandon their innovative aquaculture work and move on to other things.  And now we see an interagency proposal for research and development coming out of the Joint Subcommittee on Aquaculture that gives no credit to this earlier research or current endeavors and proposes proceeding down a path emphasizing "innovation" that sees marine aquaculture as a source of massive food production. There is some recognition of the potential for aquaculture to improve environmental quality; but it is without recognition of the designs that have been worked out already. Do they plan to do the research all over again?

NAMA does not welcome or see benefit in the substitution of marine aquaculture for fisheries; and we find proposals for industrial scales of aquaculture that mimic industrial agriculture to be frustratingly unimaginative. But "research and development" is headed in that direction, with indications that innovation means doing the same thing, just a bit better, eg. finding alternative food sources that don't strip the ocean of wild forage, building stronger cages or floating cages in the currents, engineering sterile stocks, breeding or engineering meatier strains, etc.  But these are not innovations; they take us down the same path as the green revolution toward the same environmentally disastrous end.

I would suggest that innovative aquaculture in the food system should be a whole lot different than that.   Instead of growing the same seafood species we eat from the wild, aquaculture could be used to clean up and enrich the ecosystems that naturally support those wild populations of fish and shellfish.  Marine habitats, including fishery habitats, are contaminated with toxic and nutrient pollution and many coastal ecosystems suffer from severe habitat degradation due to coastal development and damage from industrial scale fishing.  Aquaculture of seaweeds and shellfish, if done in concert with the ecosystem, can improve those habitats and thereby nurture the recovery of wild fish populations. That certainly seems a more appropriate use of marine aquaculture than fish farms that contribute further to the degradation of marine ecosystems and wild fish populations.

Land-based, closed system aquaculture of marine fish is sometimes recommended as an alternative fish farming design by those concerned by the impacts of open water farming.  However, I would suggest that a better role for land-based marine aquaculture would be to concentrate on easily cultured micro-alge, plankton, and perhaps forage fish to produce the oils and fish-meals, the markets for which now cause the base of the ocean food chain to be plundered on huge scales by industrial fleets.  The omega-3s that we covet begin in the ocean in micro-algae and are passed on to small fish such as menhaden that feed on these algae and concentrate the precious oil and then in turn pass it onto the predatory fish on which we dine. Why not get our dietary supplements and feed additives for farmed animals from closed-system aquaculture instead of robbing the natural food webs of the sea.

And finally there may be an important role for aquaculture food production if it is kept at small scales, involves appropriate and diverse species, and is fully integrated with the rest of the food system.

Some elements of the interagency proposal for aquaculture research and development are seriously misguided and exhibit a lack of vision; e.g:

Instead the Joint Subcommittee on Aquaculture might benefit from a look back at the old research and perhaps new research could expand on it. Consult with experts like John Todd and others who have managed to go on with their visions without the help of the federal government. Let's create a completely different plan for aquaculture development in the US that leads the world rather than following the rest of the world into ecologically damaging aquaculture models (e.g. those of Norway, Canada, Chile).

As you can see in our comments we recommend aquaculture policy and development that:
We propose a new vision for aquaculture in the US:
There may be other worthy and innovative visions, but more of the same is not one of them. Why can't we do this differently? Why must we have a blue revolution that mimics the green revolution with all its inherent problems? That is no kind of vision at all! It's walking backward into the future.

Posted by Northwest Atlantic Marine Alliance at 10:56 AM 1 comment: