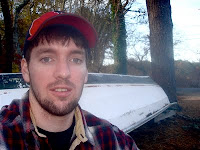 
My trip to California took an unexpected turn on day-three of the Community Food Security Conference when I got robbed at gunpoint. It was a normal quiet Monday night. I was leaving the subway around 10pm when a young man in a mask rode by on his bike, stopped in my path, and stuck a gun to my chest. And since my background is in community organizing/fishing and not street combat I didn't put up a fight. Like my mom says, "we're fishers, not fighters". Of course it was no laughing matter. He took everything I had. But he also taught me a few things.

The first thing he taught me was not to walk alone at night down dark unknown streets. The other lesson relates to a bigger picture of our food justice work at NAMA. But at the risk of jumping ahead too fast, let me start by explaining why I was in California in the first place.

I was in Oakland to participate in the US Food Sovereignty Alliance's inaugural Assembly and take part in the Community Food Security Coalition's annual conference. As in the past few years, National Family Farm Coalition worked with us to put a panel together discussing a topic that is relevant to both fishermen and farmers. This year we discussed the role of co-operatives.


The Assembly was inspiring. Along with other food advocates, farmers, and community activists from around the world, we identified some common ground in our collective work on food sovereignty. It was no surprise to hear from farmers in places like Brazil, Mexico, and Iowa that they share many of the same struggles as New England fishermen. Issues including the corporate concentration of wealth and power, the degradation of our natural resources, and the exploitation of workers. Check out more on Food Sovereignty by reading our guest blogger piece titled "Fish Sovereignty" by Tristen Quinn-Thibodeau of WhyHunger.

Our friends at La Via Campesina have created a list of seven principals that guide the Food Sovereignty movement. My experience in Oakland makes me focus on principal number six:

I couldn't help but make the connection between my masked teacher - the gunman - and the conditions that led him to rob me that night.
There seems to be a connection between our food system, poverty, and violence. In fact, I would suggest poverty is itself a form of violence, especially when it can be prevented. In its mission statement the US Food Sovereignty Alliance specifically includes "working to end poverty". At first glance this may seem like a large departure away from food justice, but it's not.
The right to healthy food and a just food system is about much more than just our food. It involves complex uses of the land, sea, and natural resources. It involves the people who harvest, raise, catch, and even eat our food. It involves the communities who help move the food to our stores, into our kitchens, and onto our plates. And it involves the health of every single person along that food chain because we depend on food for nutrition. Issues such as poverty and social injustice undermine this entire system.

That is why at NAMA we believe that connecting our local fishermen to the larger picture of food justice is critically important. Food overlaps so many of our social, economic, and environmental struggles and without paying attention to each piece we risk jeopardizing them all. For example, we can't displace our small-scale family fishermen only to be replaced by the larger-scale industrial model in the name of marine conservation. Click here to watch a fisherman's video testimony. We know all too well that doing so will not save the ocean, as getting rid of family farmers didn't save our land based environment. In fact, it increased ecological problems on land.
Since that night in Oakland I've had endless questions and imaginary scenarios run through my head. Ultimately I will never know what led that man to rob me. But what I do know is that a broken food system is directly linked to poverty, which is directly linked to desperation and crime. Even if the young man is caught the conditions that foster violence still exist both on our land and on our seas. So until we address the underlying conditions then we can't expect this type of violelnce to stop.
Along with our US Food Sovereignty Alliance partners we at NAMA are working to address those underlying conditions. And we invite you to do what you can by taking any one of the following actions:
Buy seafood that is as local to you as possible.
Join the Fish Locally Collaborative.
Sign the Pledge.
Like us on Facebook.
Posted by Northwest Atlantic Marine Alliance at 11:30 AM