Is it time to Occupy the Ocean? Or at least take it back?

Even before Stephen Colbert suggested recently on his show to occupy the ocean because someone is testing lipsticks on dolphins, we thought the Occupy movement needs to include what’s happening on the water. Sorry Stephen, we call Trademark on this one! 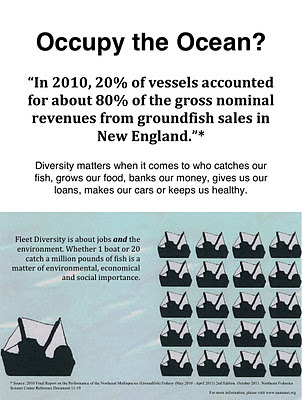 So what is happening on the water? According to a recent report by the National Oceanic & Atmospheric Association (NOAA)"In 2010, 20% of vessels accounted for about 80% of the gross nominal revenues from groundfish sales." Hmm… this sounds awfully like the rest of our economic structure the Occupy movement is bringing to our attention. Management policies implemented last year were designed to consolidate the fishing industry. This means making sure fewer boats get to catch whatever amount of fish scientists consider to be safe to catch.

In response, fishermen have begun to speak up against the rapid consolidation happening in the New England fisheries and calling for fleet diversity while tensions on the water have increased. Some fishermen report being taunted on the water because of their position. This reminds me a lot of all the stories about farmers getting harassed because they didn’t want to sell their land to the developers or agribusiness. Well, now it’s happening on the water.
On land, things are also tense.
In recent weeks a few letters have been circulated by fishermen on different ends of the discussion. Some are asking for support for the Fleet Diversity Amendment 18 and some are using the word "stability" as an excuse to maintain status quo.
Unfortunately, this status quo is bringing with it some unwelcome ecological consequences. Because the new regulations got rid of some of the input controls associated with fishing, boats who have not fished in near shore waters have been migrating inshore. Why wouldn't they? There is no longer any reason for them to travel offshore. This new migration of what was traditionally an offshore fleet is causing too much fish to be caught in nearshore waters too quickly. Inshore fishermen have been telling us over the past year that they are seeing signs of decline in the cod stocks, for example. Which is shame because over the past 15 years the cod has been coming back because of their sacrifices. So seeing it go away because of errors in management is heart breaking.
So why would anyone oppose fixing errors we know are having negative impact on the fish stocks and will destabilize the fleet economically down the line? This isn't just rhetoric. We have watched how consolidation and elimination of input controls have undermined the stability of so many industries. That's what the Occupy movement is bringing to our attention.
On the fisheries front, I hear the arguments as Alan Greenspan was making when he thought he knew what would fix our financial system: fewer, more efficient players that have ownership over the market and will take care of things. They’ll be easier to manage and ultimately the strong will survive and weak will either have to sell out to the highest bidder or amass capital at any cost to scale up their operations.
If you haven’t done so yet, I encourage you to watch this video, if not the whole thing at least the very beginning and then from 1:45 to about 2:10 where Alan Greenpsan talks about how wrong his assumptions were. That’s where we are headed when it comes to fisheries and why we need fleet diversity.
What’s worse, and once again mimics all that’s been happening with the rest of our economic structure, some who favor consolidation of the fishing industry instead of fleet diversity are actually asking for removal of yet more protections already in place – such as opening up certain areas that have been closed to fishing for the sake of the fish - to make it easier and more efficient for them to operate. Keep in mind it's these closed areas that have helped bring back the fish like cod. To remove them now will be a mistake and a slap in the face of the fishermen who gave up their traditional fishing grounds years ago because they knew it was the right thing to do.

We have an opportunity to do something about all this. The New England Fishery Management Council has voted to move forward with the Fleet Diversity Amendment 18. This amendment has the support of a lot of fishermen as well as local food advocates and fishing communities. Over the next few months, a public hearing process around this amendment will begin. I hope all of you who have been paying attention to what consolidation and concentration of power has done to the rest of our economic and food system pay attention to this process and participate. Without your voices we will end up adding another industry to the long list that currently include the financial, auto, health care, food and housing.

We can change the course. We need to empower the community based fishermen who can fish with the smallest ecological footprint yet have the broadest economic and social benefit. To do that we need to make sure the Fleet Diversity Amendment 18 corrects the errors that currently exist in fisheries management here in New England. And hopefully this work will provide other regions who are exploring Catch Shares to make sure the same mistakes are avoided from the get-go.
Consider the Fleet Diversity Amendment 18 your vehicle for Occupying the Ocean... or taking it back.
Posted by Northwest Atlantic Marine Alliance at 1:09 PM No comments: