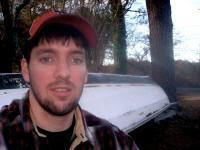 Two local chefs. One mystery fish. A spot light on local fishermen and locally-caught seafood. By the end of the day only one winner emerged, but for our 2011 kick-off Seafood Throwdown it was a win-win-win for all involved.

Kicking it off Brooklyn style - check out our Seafood Throwdown video post.

GrowNYC/Greenmarket invited us back for our second annual Seafood Throwdown, this year to be held at the Grand Army Plaza in Brooklyn. Local fisherman Alex Villani was on site and capturing the crowds curiosity and appreciation with stories about locally-caught seafood. The fish of the day was Bonito! 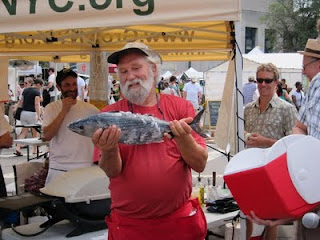 Seafood Throwdowns, in a nutshell, are educational and community driven events to engage the larger community in issues affecting our ocean, fishing communities and fisheries. They help us promote the ecological and economic importance of locally-caught seafood and build a broader base of support for efforts to transform fisheries and ocean policy. Read more here. And not to mention, they produce some darn-tasty food! 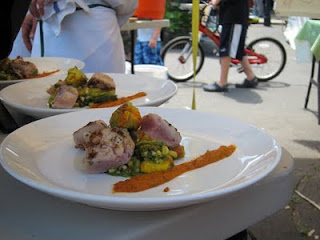 Under the hot Brooklyn sun the event had a great turnout and was certainly a true collaborative effort. The two local restaurants, iCi and Thistle Hill Tavern, battled for the most creative and delicious dish. Judging the event was Edible Manhattan and Edible Brooklyn's deputy editor and James Beard award-winning writer, Rachel Wharton, Blue Moon Fish's Alex Villani, and GrowNYC's David Hurd, director of the Office of Recycling Outreach and Education. Matt Timms, famously known for his rollicking Takedown series was our Emcee, giving the play-by-play for all the action.

Check out more pics from the day.

Posted by Northwest Atlantic Marine Alliance at 11:41 AM No comments:

By Cary White, NAMA's Outreach and Policy Intern
When I told one of my professors at school that I would be spending the summer doing advocacy for New England’s small-scale fishing fleet, he said, “Wow, so you’re actually doing something interesting over your break.”  That’s when I began to think, yea, I guess I did sort of luck into this internship.  While the rest of my friends are home waiting tables or doing busy work at some big, impersonal firm, I have attended a Fisheries Council meeting, fished out of Portland with Maine’s only commercial jig fisherman, and worked at the heart of one of the most important social events in the history of New England’s coastal communities.
My path to NAMA began in mid-November while I was participating in the Williams-Mystic maritime studies semester program.  For a final project, all of the students were required to write a research paper on some marine policy issue.  Being a little naïve at the time, I decided to write about Amendment 16 (The policy that set up sector management in New England).  Little did I know the scope of what I was getting myself into.  Having not grown up near the coast, I was surprised to discover the range of emotions and viewpoints concerning what seemed like a simple management strategy on paper.  Luckily, I stumbled across the NAMA website and gave their Community Organizer Brett Tolley a call.  Brett was very helpful and opened up sides of the issue that many of my other sources were ignoring and helped me grasp the source of the fishermen’s outrage.  I soon found that the fisheries debate had much to do with my own political inclinations.
When I tell people that I’m working in fisheries, most people assume that I must be interested in biology or marine sciences.  However, what always drew me to fisheries was in fact the social side of things.  The commercial fishing profession is very unique in today’s world.  Almost everyone today chooses or is pushed into making a living by selling their time to someone else.  What most people fail to fully appreciate though is that for the majority of human history, this was not the case.  In fact, up until about 150 years ago in America, it was considered embarrassing to have another human being be in charge of your own labor.  With the demise of our country’s farms, the small boat owner-operator fisherman has become America’s closest thing to a “traditional” worker; that is, he is able to decide when, where, and for how long he works as well as choosing to whom he markets his product without having these decisions dictated by someone up the management chain.  This is not to idealize the conditions of the small-boat fisherman—it is difficult, dangerous, and uncertain work—but rather to point out that, in a perfect world, he or she can lay claim to a certain degree of freedom that most other working men and women can’t.  I believe that it is important for us as a society to keep alive and to take seriously these alternative structures of labor so that we have a better frame of reference when faced with choices that will impact our world.
As I’ve been with NAMA for a few weeks now, I have also begun to think more and more about the possibilities of area—or ecosystem-based—management.  While almost everyone seems to have a hard time pinning down just exactly area management would look like, everyone seems to agree on its benefits.  Area management aims to cut the management units up in to more bite-sized pieces and thus provide a much more holistic idea of the relationships in a marine ecosystem and better inform quota levels and fishing rights.  If we read between the lines, the drive towards area management has shown us above all that science needs local knowledge.  I firmly believe that while scientific studies are often useful and insightful in their own right, they can just as often turn our attention away from the statistically improbable events that might be happening before our eyes.  When I went groundfishing with Ed Snell out of Portland, I caught a small glimpse just how it might feel for a fisherman who has used up his cod quota, but who still knows that the cod population is booming below his boat.  Almost no one is better equipped to judge the heath of the marine environment than the fisherman himself.
Just the other day, Brett and I were talking to a couple fishermen down at the Gloucester piers and one of them remarked, “We’re the last hunter-gatherers.”  I think this is almost dead on.  Fishermen fill a vital role in providing food for the rest of us while ensuring the future sustainability of that food source.  However, I don’t think that they need to be the last.  Down the road, I believe that a successful area management program can set an example of a new way for us all to think about our relationship to the natural world; a frame of mind that is far less destructive of the natural world while simultaneously providing a more relevant and fulfilling experience for those humans who interact with it.  It will provide channels for fishermen to become better conservationists and for scientists to have better access to local knowledge.
So that’s my spiel.  I’ll be working with Niaz in Gloucester this summer so if anyone is in the Cape Ann area and wants to say hi, I’d be more than happy to meet you.  I’m definitely an outsider to the fisheries world, so I’m grateful for any insight on navigating it.
Glad to be onboard
-Cary
Posted by Northwest Atlantic Marine Alliance at 12:23 PM 2 comments: